We’ve been a part of the community for over 160 years.  The original bluestone hospital atop the Wedge Street hill was officially opened in 1854. 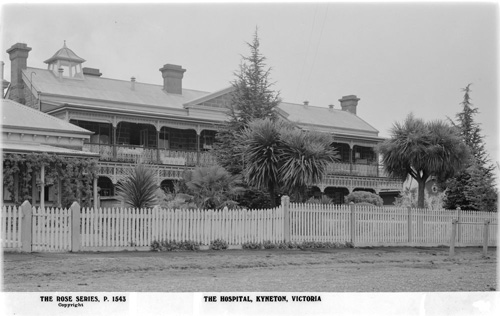 It wasn’t until 1932 that babies were delivered. Until then small private hospitals provided home visit midwifery services across the township.

Back then times were tough. Cold winters and dry hot summers took their toll on locals and those travelling through to the Bendigo Goldfields. The main street was frequently a boggy mess.

As time went on, the hospital cared for patients through contagious disease outbreaks, injured soldiers returning from War, accidents, injury and everything that life threw at the early residents of Kyneton and surrounding areas.

At the turn of the 21st century, developments in healthcare and local population growth meant it was time for modern facilities.

The new hospital in Caroline Chisholm Drive was opened by the Premier in 2003, and our $7.4M Ambulatory Care Centre was unveiled in 2015.

As a small rural hospital Kyneton District Health continues to respond to local health needs, and to collaborate with our community and partners to deliver care that is personal, connected, right and safe.

In 2017 KDH was announced as the Premier’s Small Rural Health Service of the Year.

KDH is committed to supporting diversity and vulnerable people in our community.

We acknowledge the Traditional Owners of the land and pay our respects to their Elders past and present.